Saudi Arabia told OPEC that it cut oil production by the most in more than eight years, going beyond its obligations under a deal to balance world markets.

The kingdom reported that it reduced output by 717,600 barrels a day last month to 9.748 million a day, according to a monthly report from the Organization of Petroleum Exporting Countries. The group’s own analysts, who compile data from external sources, estimated that Saudi Arabia made a smaller 496,000 barrel-a-day cut -- in line with last year’s supply agreement. 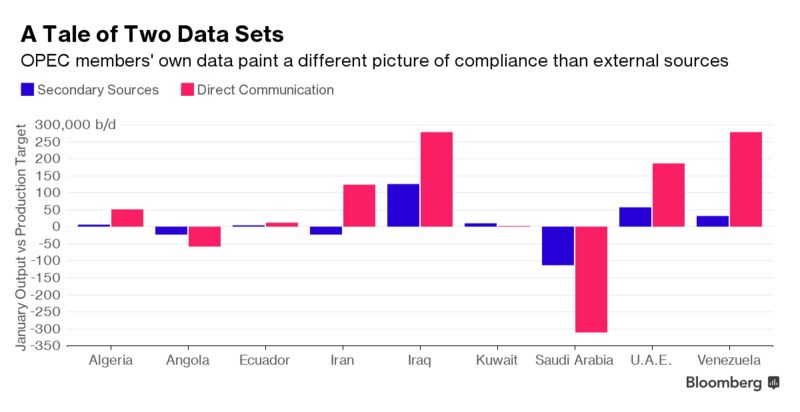 “OPEC has done particularly well, they’ve surprised most analysts,” Spencer Welch, director of oil markets and downstream at IHS Markit, said in a Bloomberg radio interview before the report was published. “Saudi Arabia has made a particular effort to boost compliance.”

OPEC and Russia are leading a push by global producers to end a three-year oil surplus that sent prices crashing and battered their economies. While prices initially rallied 20 percent in the weeks after OPEC’s Nov. 30 agreement, the gains have since faltered on concern that rebounding U.S. output will fill the gap left by OPEC’s cuts.

Saudi Arabia’s data indicate it’s pumping about 310,000 barrels a day below its specified target. Saudi Arabian Energy Minister Khalid Al-Falih had said on Dec. 10 that the kingdom was willing to cut even more than was required to demonstrate its commitment to the accord. Oil markets shrugged off the report, with West Texas Intermediate crude falling as much as 2 percent to $52.77 a barrel as of 11:56 a.m in New York on Monday.

The negotiations leading to OPEC’s agreement in November were marked by a dispute over which production data to use. The group’s so-called secondary sources numbers -- derived from six external estimates -- form the baseline for the accord, even though Iraq had argued that the figures weren’t accurate and initially insisted that only statistics supplied by member governments should be used.

OPEC secondary sources estimates indicate a far higher degree of compliance, with the 11 countries subject to the accord achieving more than 90 percent of the agreed cuts. The group’s output fell by 890,200 barrels a day from a month earlier to 32.139 million in January, the data show.

OPEC agreed in November to reduce production to 32.5 million barrels a day, although that total included about 750,000 barrels a day from Indonesia, which has since suspended its membership.

Iraq may be in the process of improving its adherence to the deal, shipping data suggest. The nation’s exports will fall to a seven-month low of 3.01 million barrels a day in March, down from 3.64 million this month, loading programs obtained by Bloomberg show.